This a snapshot overview (as of 4/7/2021) of the previously unsubmitted sexual assault kits (SAKs) inventoried as part of the WiSAKI project and the current project stage for the kits. The overview and numbers will continue to change as kits move through the submission and testing process. Definitions for each of these categories can be found below. 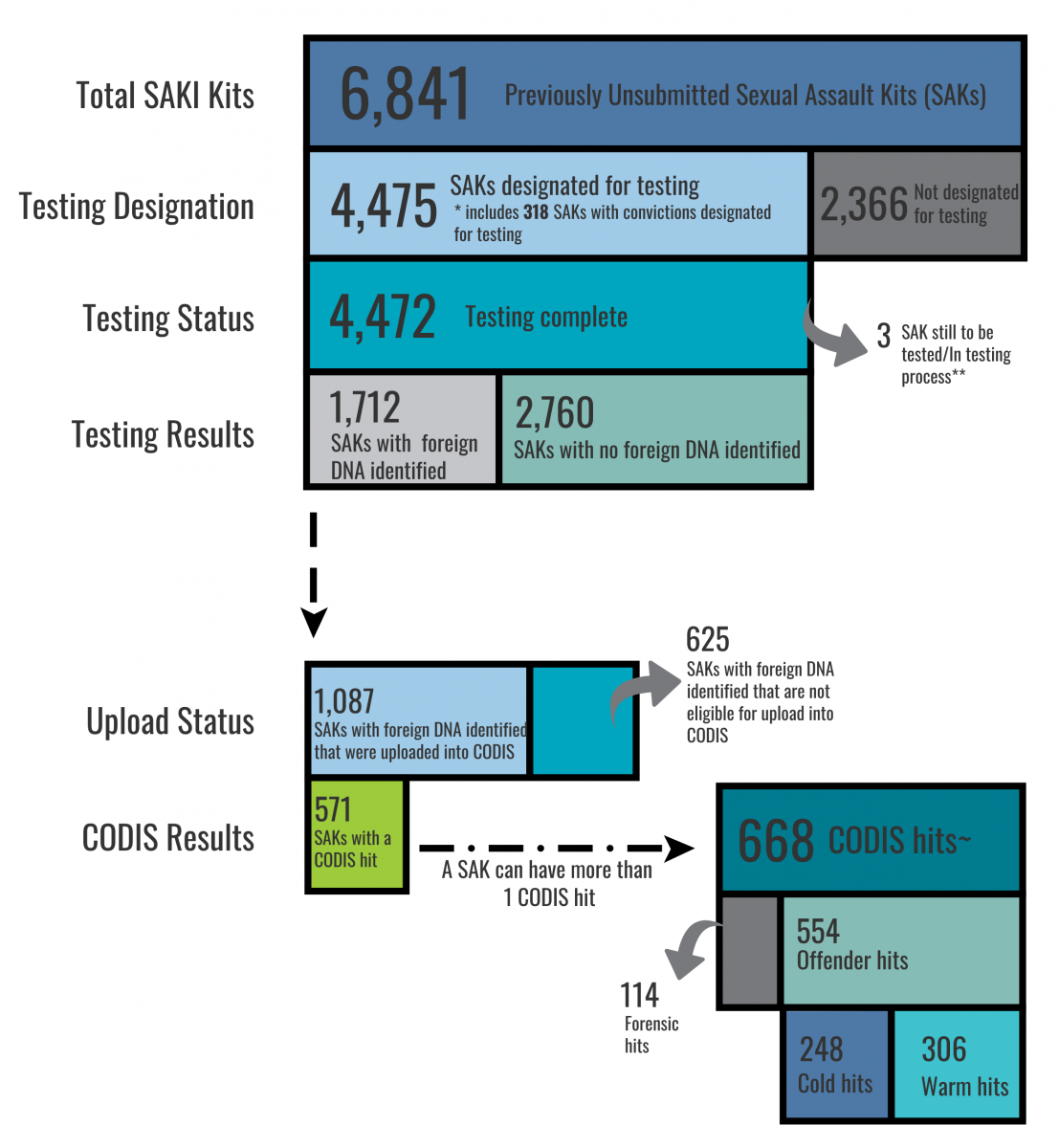 Total number of sexual assault kits inventoried through the Wisconsin Sexual Assault Kit Initiative (WiSAKI) project. Prior to the project, the kits were being held by law enforcement agencies or hospitals and had not been previously submitted to the Wisconsin State Crime Laboratory (WSCL) for DNA testing.  For more detail on the inventory process, click  here.

*SAKs with convictions designated for testing:  A sample of SAKs from cases in which there were already convictions related to those incidents. This sample consists of two groups:

(2) a random sample of SAKs, as noted in the original inventory methodology, where the convicted offender(s) for that incident have DNA profiles in CODIS.

The SAKs in the sample have now been submitted to the WSCL. They will be tested for DNA by one of the external partner labs. As these SAKs are now designated for testing, they will be included with the other SAKs that were designated to be tested in all reporting for the project.

Not designated for testing: There are certain circumstances in which the SAKs are not currently designated for testing. To learn more about those reasons and the breakdown click here. A small percentage of SAKs were tested but results were not included because the SAKs do not meet the WiSAKI project testing criteria.

Testing complete: The external lab has completed testing and submitted the results for the WSCL to review.

**Still to be tested/In testing process: The SAK is either being submitted to the WSCL to be transferred to an external lab for testing or is already at an external lab, but the testing is not yet complete. These SAKs were identified by law enforcement agencies or hospitals after June 1, 2018 or were part of the sample of SAKs with convictions that had their testing designation changed to designated for testing.

SAKs with foreign DNA identified: DNA testing of the SAK identified DNA that was not from the victim.

SAKs with no foreign DNA identified: DNA testing of the SAK either identified no DNA or only DNA from the victim.

***Awaiting confirmed testing results: The WSCL must technically review all of the testing results from the external lab(s) before the results can be confirmed.  Click here to learn more about the SAK testing process.

SAKs with foreign DNA identified that were not eligible for upload into CODIS: A foreign DNA profile that was identified from the DNA testing of the SAK did not meet the FBI’s eligibility criteria (e.g. being a mixture from more than one person; being a profile that isn’t unique enough to identify a single person) and could not be uploaded into CODIS.

SAKs with a CODIS hit: The foreign DNA profile from the SAK that was uploaded into CODIS matched against another profile within CODIS. A SAK can have more than one CODIS hit. This number can continually change as hits can happen indefinitely into the future.

~CODIS hits: The foreign DNA profile from the SAK that was uploaded into CODIS matched against one or more profiles within CODIS. A SAK can have more than one CODIS hit, so the total number of hits may exceed the number of SAKs with CODIS hits. This number can continually change as hits can happen indefinitely into the future. A hit can be either a forensic hit or an offender hit.

Please Note: For this purpose, all CODIS hits (both forensic and offender) are counted regardless of whether they provide a specific investigative lead for a particular case. The CODIS hit counts include each individual hit between cases, as well as those to an offender. The total number of hits is utilized to be able to demonstrate case connectivity and where hits are generating by county and from other states. This may differ from how CODIS hits are counted for other reporting purposes.

Forensic hit: The foreign DNA profile from the SAK that was uploaded into CODIS hit against a profile in the forensic index. The forensic index contains evidentiary profiles from crimes and are connected to incidents or cases and not to specific individuals.

Offender hit: The foreign DNA profile from the SAK that was uploaded into CODIS hit against a profile in the offender or arrestee index. The offender and arrestee indexes contain DNA profiles obtained at the time of arrest or conviction and are connected to a named individual. For the purposes of this project, offender hits can be classified as cold or warm hits. This terminology and sub-classification is different than current FBI/CODIS terminology.

Cold hit: The foreign DNA profile from the SAK hit against an offender or arrestee profile and that offender/arrestee was not identified as a suspect in the case associated with the SAK.

Warm (confirmatory) hit: The foreign DNA profile from the SAK hit against an offender or arrestee profile and that offender/arrestee was identified as a suspect in the case associated with the SAK.